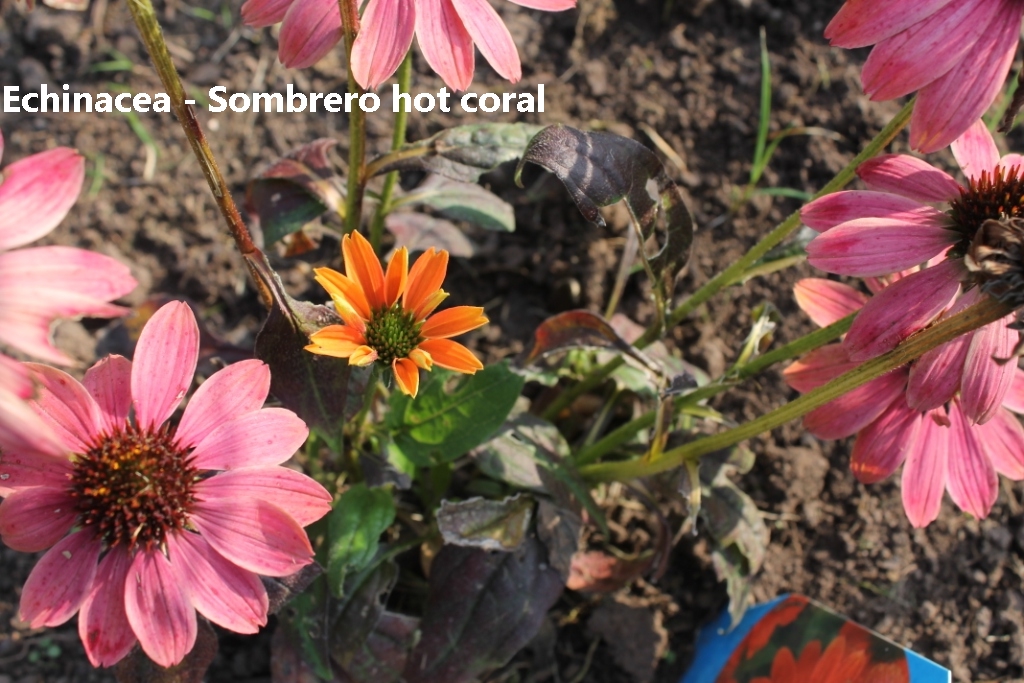 A month or so ago I visited a garden centre with a friend, both of us with an eye for a bargain, bought a couple of plants reduced to 50 pence each. I bought a sweet pepper and an aubergine both looked healthy with buds. I came home and planted them in the ground. I then decided to do some research and realised they were both greenhouse plants and as I suspected it was very late in the season. I don’t have a greenhouse, but recently bought a plastic cloche from the pound shop to protect the plants as the nights are getting cooler. To see the pretty flowers on the aubergine, a first for me, has been enough of a reward for my initial investment. Rio thinks I bought the plastic cloche for his warmth and comfort.

After taking the above photos, I was walking up the path and the echinacea’s beauty caught my eye – stunning!

This family website would be incomplete without a page for our Podenco Andaluz, who we had as our constant companion from 2003 until February 2015.

We had previously had a similar Andalucian Hunting Hound called Owen, but he was stolen in 2002. In May the next year, our vet in Albox, Juan-Jesus,  became aware of some puppies with their mother in a field in Los Carrascos. He telephoned us and as a result we met up with Brian in our village who showed us where they were. He chased one up a hill and caught a male puppy, and as he was just like our stolen Owen, we decided to keep him and gave him the same name. This picture was taken shortly after we picked up Owen from the “campo” at the end of the village.

The first night that we had him he would not settle until he was on our bed! It was a habit which was easy to start, but not to stop. During the winter he would often sleep next to me in the bed. In the summer it was too hot.

At this time, we still had Sally, our dog from England, and she soon accepted him and we would walk them most days, together. We also had our 3 grown up children still around and Owen became loved by all. He was a protective hound, which sometimes caused us some problems when out walking, he also would bark at anyone he considered a threat walking past our house, when he was in our garden. If I walked to the bins or went outside, he would go outside and check on me from the garden. In fact this view taken from Google Streetview shows me at the bins and Owen looking out from the garden. I am on the left and Owen can be seen on the top right against the white building. (Click photo to expand it).

Eventually Sally died and we just had the one dog. I walked Owen every day, whatever the weather. He also accompanied us on several “hashes”. This video shows him running on one of our daily walks:

He was a handsome hound as this photo, taken by my son, shows: In December 2014 when we moved back to England, we knew that Owen was feeling his age. He often limped because his joints were wearing out after all the running he had done. He travelled to England in the car with us and our 2 cats.
In February 2015 we had to say our final goodbye to Owen II as he was in so much pain from his joints, his quality of life had become poor.
We do miss him, he was the best dog I ever had, and was with us for a huge part of our Spanish adventure. We shouldn’t be sad as he had such a wonderful life, so thanks, Owen, for being part of our family for 12 years!

Sadly two of our palm trees have succumbed to this dreadful weevil. Fortunately the hens love to eat the grubs, so as John cuts down  and removes the affected material the hens take particular interest.